Ginger and April are a married lesbian couple in Alabama with an eleven year old adoptive daughter. For years, before marriage equality was the law of the land, they were turned away by adoption agencies because they weren’t married. During these same years, over 1,800 children in Alabama’s foster care system were waiting to be adopted. 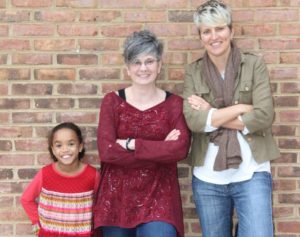 Click the picture to watch April and Ginger’s Story

Lesbian married couples in Michigan and Texas who have been denied the opportunity to apply to be foster parents simply because of whom they love are suing in federal court to overcome this discrimination. These cases could eventually land before the Supreme Court. And there, the Court will decide whether these families will experience full marriage equality or what Justice Ruth Bader Ginsburg has called “skim milk marriage” without all the attendant rights, benefits and responsibilities that straight spouses enjoy.

LGBTQ Americans are worried about whether a Supreme Court with Brett Kavanaugh on it will stand up for all American families – including ours. We worry how Kavanaugh will rule when we seek redress for the harms and discrimination we’ve experienced. We worry about whether we should take a promotion that would move us from a state with strong LGBTQ family legal protections to a state where we or our children could be turned away by public services or businesses simply because of who we are and whom we love.

Brett Kavanaugh has said that he respects precedent. President Trump’s previous nominee to the Court, Neal Gorsuch, said the same thing – but once on the Supreme Court turned around and opposed full marriage equality by dissenting from the Court’s ruling that both same-sex spouses must be listed on their child’s birth certificate. Justice Gorsuch opposed the Arkansas lesbian parents in the Pavan case even though the Court’s Obergefell opinion had included “birth and death certificates” in its list of “rights, benefits, and responsibilities” of marriage.

LGBTQ families worry because the Senate is rushing forward with Kavanaugh’s confirmation hearing even though Senators have not received millions of requested documents dating from his lengthy tenure as staff secretary to President George W. Bush. These documents could spotlight any role Kavanaugh played in Bush’s efforts to amend the constitution to limit marriage to a union between a man and a woman. We worry because Kavanaugh’s nomination was approved by far-right conservative organizations opposed to LGBTQ equality including the Heritage Foundation and Federalist Society which are committed to rolling back civil rights protections – and which support overturning Roe and its promise of personal liberty upon which so many legal protections for LGBTQ people and our families are based.

The Supreme Court will rule in future cases whether full marriage equality is still the law of the land or whether the personal beliefs of some Americans can dictate the lives of others and chip away at that equality. The Court will rule whether our nation’s nondiscrimination laws include protections for LGBTQ people, as many lower courts have already ruled, in the areas of employment, housing, healthcare and education. The Court will rule whether qualified transgender Americans can be turned away from serving in the military, simply because of who they are.

We can’t afford another Supreme Court justice who will undermine LGBTQ people and our families. Kavanaugh’s support for corporations over individuals, willingness to allow employers to curtail worker’s benefits based on personal beliefs, and dissents against the Affordable Care Act show that he is outside the mainstream. LGBTQ Americans demand the U.S. Senate reject Kavanaugh’s nomination and confirm a fair-minded constitutionalist who will protect all families and our children.

Join April and Ginger in telling your Senators to vote NO on Kavanaugh’s nomination to the Supreme Court.

Together we can build a stronger community, change hearts and minds, and advance social justice for all families.
Submit a Story