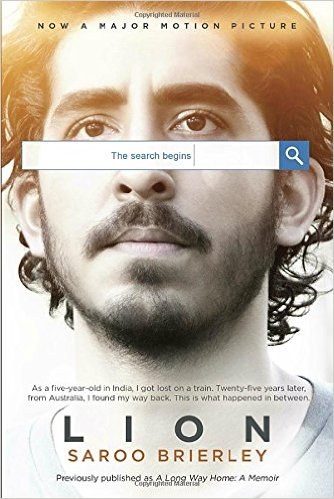 In this holiday season of bright lights, glitter and feel-good television commercials—alongside disturbing instances of domestic and international terrorism-- I find myself searching the landscape for things that are real, authentic, and positive. Things that feed the soul.

The movie, “Lion,” provides just such an experience. It is based on a true story about an Indian boy, Saroo (played by Dev Patel). The screenplay was adapted from Saroo Brierly’s book, A Long Way Home, so we are looking at life through his eyes.

This is an adoption story, both heartbreaking and heartwarming. In the beginning we see Saroo, age five, surrounded by thousands of golden butterflies. He is a beautiful child, in a beautiful, brilliant land. One day he leaves his small town with his teenage brother, Guddu, who is looking for work. They become separated from each other when Saroo falls asleep on a train. After many hours, It finally stops in Calcutta, thousands of miles away from home. Saroo lives on the streets of Calcutta while he searches for help. He is finally taken in by an orphanage. Soon after, he is adopted by an Australian couple, John and Sue Brierly, played by David Wenham and Nicole Kidman. Once transported to Australia, Saroo appears to have a normal, happy childhood, where his life in India is forgotten.

When the 20-something Saroo decides to go to school, to study hotel management, he meets and falls in love with Lucy, played by Rooney Mara. At a party with Lucy, Indian food is served, and Saroo has a flashback about his life in India. More flashbacks ensue, and Saroo feels compelled to find his birth mother. He isolates himself from Lucy and his adoptive parents, who are deeply saddened. Through Google Earth, Saroo finally discovers that he is from Ganeshtalay. He sets out for India, in search of his birth mother.

Saroo finds her in this tiny village, and it is a joyous meeting. He learns that his birth mother never left Ganeshtalay, in hopes that Saroo would return. Later on, while the credits are rolling, we are treated to the sight of Saroo’s adoptive mother and birth mother meeting, and embracing each other. This happens later-- one of the wonderful things about this film is the way past, present and future are constantly juxtaposed against one another. This helps us understand the kaleidoscope of feelings and places that make up Saroo’s life.

It is not until the end of the film that we learn the meaning of the film’s title, “Lion.” While in India, Saroo is told that his real name is Sheru, not Saroo, and that the name means lion.

The film manages to tell a story that could easily be sentimental—but is not. Saroo’s feelings are explored head-on--- from the sadness of a lost child, later loved and nurtured by adoptive parents, to the deep need to find his beginnings, to the feelings of both his adoptive mother and birth mother, and finally to the joy felt by Saroo, when he is able to merge his present life to his past life—and in the process, become whole.

Yes, this is a film that feeds the soul.